I’m not the healthiest person around. I don’t like nor eat vegetables. And perhaps this is one of the main reasons why I’m proud to say that Rui is exclusively breastfed from the start. And now that she’s nearing the 6th month mark, here are some thoughts on our breastfeeding journey. 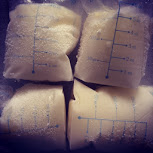 Breastfeeding is hard. Especially during the first weeks. Rui’s first day was mostly spent sleeping. But her first night was another matter. She cried almost every hour and the only way to pacify her was to nurse her. So this meant almost no rest for me. But even then, the husband and I never considered na she’s not getting anything from me – may mali ba sa amin? We asked the OB if this is normal and she said it is, since an infant’s stomach is the size of a calamansi palang. So it makes sense na mabilis siya mabusog and mabilis din magutom.

Again for the first weeks, I dreaded every feeding because it was painful. As in. Even taking a shower was painful. Perhaps my breasts were not yet used to all that activity, but there were times when I wanted to resort to bottle and formula na. What prevented us from doing so was the fact that we weren’t able to ask the pedia for a formula milk recommendation – haha. Plus, while I was unable to read up much on breastfeeding before I gave birth, I had much more free time when I did and Google on my fingertips that I eventually did read up on it. One of the things that made me decide to forge on was studies that breastfeeding reduces risks of allergies. I’m allergic to almost everything (including my own sweat) and I don’t want that for Rui. Another thing that gave me hope is that Google contains a lot of testimonies that it is painful but that it will get better in the long run. Marami pala akong karamay! So yey din for Google. 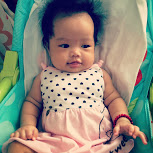 By around Rui’s third week, I accepted the fact that she’s entirely dependent to me and she’s the boss I can never ignore (buti nalang she’s a cute boss). I think this mindset helped me cope up with the almost hourly feedings. All my activities – including taking a bath were scheduled right after her feedings, so that I’ll be available again for the next. I tried pumping around the second week (which I now know is a no- no) so I can leave her at home while I go for my checkup. I got less than an oz of milk – so I just took her with me. Inisip ko nalang mas nakukuha niya kaysa sa pump- which I now know is true.

Breastfeeding got a lot easier by Rui’s first month. Personally, it is easier than washing and sterilising bottles, bringing bottles everywhere, and magtimpla every time she asks for it. But I was sleepy most of the time since I get up to nurse her during the night. The husband was a zombie too as he’s a big help from the start – as he also wakes up during the night to burp her after every feeding. A co-worker advised me to try nursing her in a side-lying position and also to join in on a Facebook group dedicated to breastfeeding. I did and the group is a big help and very informative. By Rui’s third month, we do the side-lying position na when she nurses at night time – this way, plakda na kaming tatlo haha. After every feeding, I just roll her on top of me to burp – all this while both of us are asleep. This again beats getting up to get a bottle for her.

Another thing I love is when she’s fussy and has sumpong, I can calm her better than anyone can – haha secret weapon lang ang peg. Plus nothing beats the secret smiles we share during nursing time.

I am by no means a “breastfeeding nazi.” To each her own I say. But I think lang na some people overthink breastfeeding – this plus the million Filipino myths about it, and it becomes harder than it really is. If an oldie is with us, baka binatukan na ako because ginawa ko na ata lahat ng bawal. This includes:

I eat ice cream by the mug-fulls ever since I gave birth, I drink cold water too – and yet my milk is still the right temperature for Rui. Never siya naging malamig – maybe because I’m not cold-blooded. To date, Rui also never had coughs or colds *knock on wood.

I nurse Rui kahit na pagod or galing sa labas. Err we’re new parents, palagi kami pagod. And yet she doesn’t mind it, nor does she seem stressed or pagod after feeding. In fact, happy siya after because she’s full na ulit.

Perhaps I’m lucky enough to be blessed with sufficient supply. My goal in the beginning was to breastfeed as long as kaya, and I’m happy na kinaya namin until the 6th month mark. Still, I plan to continue as long as she wants and kaya.

I’d like to share that one of the best advices I read about childbirth and breastfeeding is to trust your body as it knows what to do and is built to do it. This held true for Rui’s birth as we waited for her to meet the world on her own. And I’m glad to say that it also held true for us for breastfeeding. Yes I did drink supplements, but overall I just did what I had to do – which was to latch her every time she wants it and trust in my ability to nourish her.

Another challenge awaits us: solids or Baby led weaning. I can’t wait haha.